Siete hermanas is a social apartment complex that contains many different varieties of public spaces. The block is highly accessible for everyone, and there are few areas that are restricted – apart from the apartments. The project contains a great variety of both spacial qualities and «publicness», qualities that are important in large scale social living. When you enter the main building of siete hermanas, the first you meet, is a long open corridor. This can be considered as the most public space in the building, and it is probably one of the spaces that gets passed by most people during a normal day. The corridor works as a small street crossing through middle of the building body, with a variety of different openings and installations, as well as a couple of small kiosks. (1)

From the corridor, you can reach a great number of staircases, leading the people who live in the building towards their individual apartments. The staircases also contain a great variety of open spaces, and viewpoints, that can offer views of the spectacular composition of buildings surrounding it, or views towards the woods/ natural area that surrounds the complex. The stairs that lead the the residences to their apartments, contain two sets of small hallways on each side of each floor. These small corridors, are the most private of the public spaces in the building, each supplying 3-6 apartments only. Some are «customized» with plants, storage and some even with their own gates. (2)

The complex consist of the main building, connected to a series of smaller buildings. The visual connections are established with the same style in all the buildings in addition to walkways/bridges connecting the most of the buildings, but varieties in color, direction, height and open spaces, separate the different parts, and create different spacial qualities. This is an important aspect when creating large scale social housing, to give different individuals, different visual connections to their building.

From my understanding, social housing is housing projects that are served to house the general public, and not just the most wealthy part of it. Where a capitalistic construction-marked excludes a big part of the population (as new buildings in general are built to serve the part of the population with most money), public housing projects help balance the differences that occur in such a marked. And since the building marked generally supply people with capital, it is often necessary with support from the government or municipality of the individual places.

As social housing projects are also built in a capitalistic market, they often come in large scale complexes to reduce cost per square-meter. In projects such as seven hermanas, it is therefore important to create different qualities and different places, to make it easier for the inhabitants to identify with their part of a complex. Good spacial qualities should be developed in the public areas, ass these serve everyone, and can help raise good opinions on the projects. If the opinion of the projects are raised by good public spaces, the inhabitants will hold more pride of living in the projects, and this can (as demonstrated well in seven hermanas) extend the life of the social housing projects. 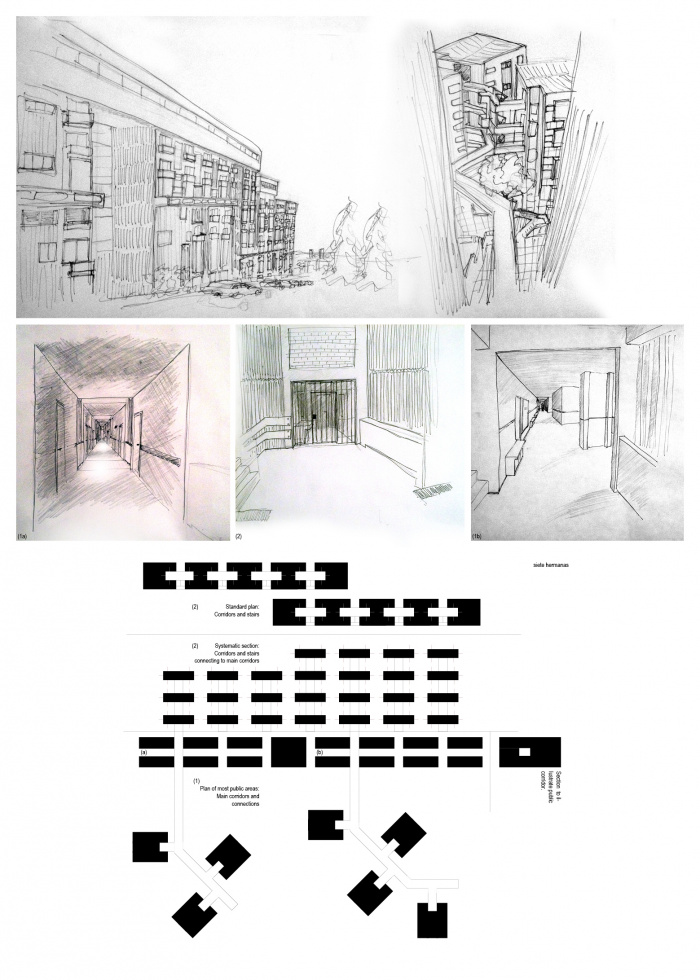